Cumulus - A BFT based sidechain protocol for Off Chain Scaling 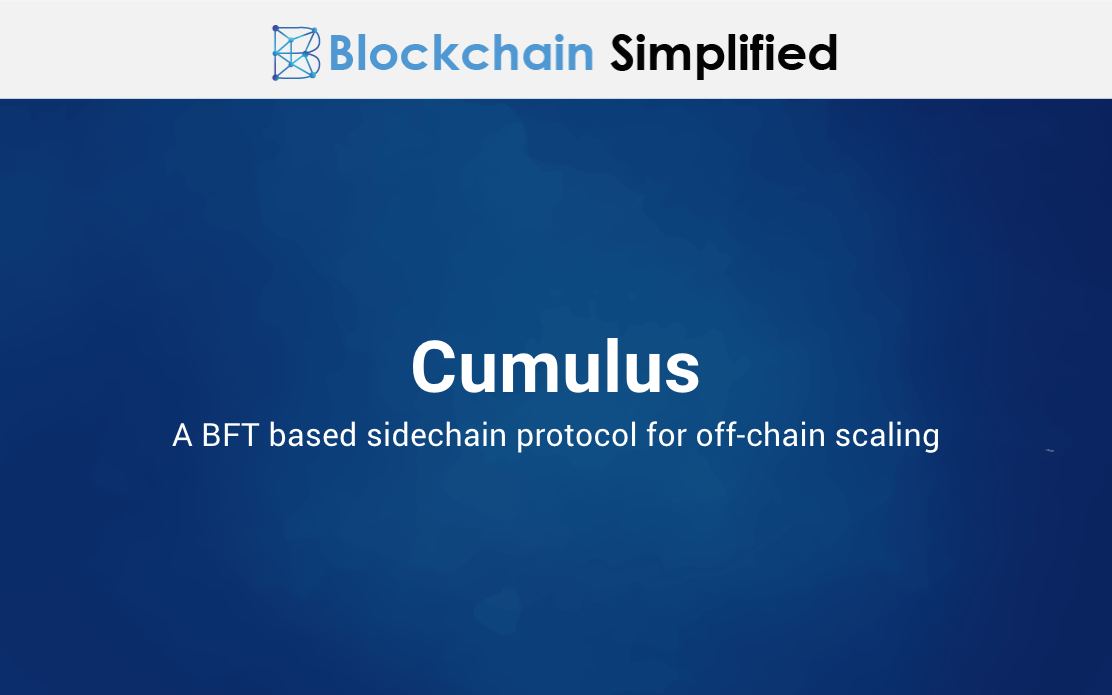 To tackle scalability and interoperability issues of Blockchain, Layer 2 Scaling or Off chain scaling solutions were introduced. We saw how Matic Network, Bitcoin Lightning and Ethereum Plasma solve scalability problems of blockchain by implementing a different blockchain layer called sidechains. Sidechains are basically blockchains on their own which perform many tasks and reduce the workload on the base layer, thus increasing scalability. But until now, sidechains performed secondary tasks and not actual block addition or validation since they were not allowed to execute consensus protocols to validate any block. They also relied on the main chain chain for security. But over time, sidechains have also been made ready to run consensus processes within themselves.

Today in this blog, let us learn about once such sidechain protocol called the Cumulus that not only executes consensus protocols but also is supremely efficient and a low-cost, secure sidechain.

What is Cumulus protocol? 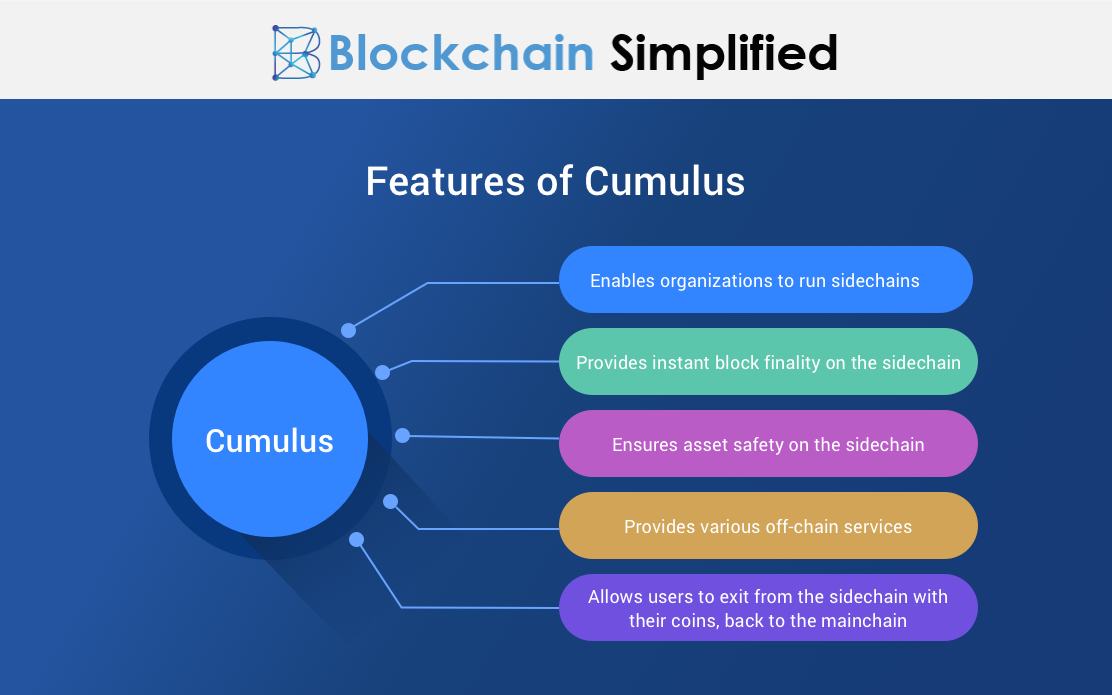 Cumulus is Byzantine Fault Tolerance based sidechain protocol built for implementing off chain scaling solutions. It was designed with the purpose of serving as an extension to the Substrate framework that builds parachains on Polkadot. Cumulus was created with the objective of making these Substrate built parachains compatible with Polkadot. Deploying these parachains on Polkadot is an easy process once Cumulus is integrated with Substrate. Cumulus is basically a tool - a set of libraries - that provides a ready consensus engine for Substrate. Parachains (created on Substrate integrated with Cumulus) can be ported to Polkadot with nominal changes - as little as adding a couple of lines in the code; since the consensus is already carried out on Cumulus.

The Cumulus sidechain is set up by deploying smart contracts that represent every validator on the network. When clients/users submit any transaction, then a designated validator for that particular epoch acknowledges it, executes it and collects them in a block with a forwarding message. The validator then broadcast this block to other validators. All the other validators validate the block and upvote it if they deem the block as valid. Once the block and the respective epoch validator receive sufficient numbers of votes, the block is added to the chain and the hash is committed.

The point where the hash is committed is recorded as a checkpoint. This checkpoint basically stores the state of the epoch. In event of any invalid checkpoint submission or absence of checkpoint submission even after receiving sufficient votes, the designated validator is challenged by others and is later penalized for non-submission. If a client or users sense anything amiss or ingenuine in the entire consensus process, they can immediately withdraw from the latest checkpoint.

Here are some features of the Cumulus protocol,

3) Ensures asset safety on the sidechain

4) Allows users to exit from the sidechain with their coins, back to the mainchain

Go through a detailed technical documentation of Cumulus to know more. 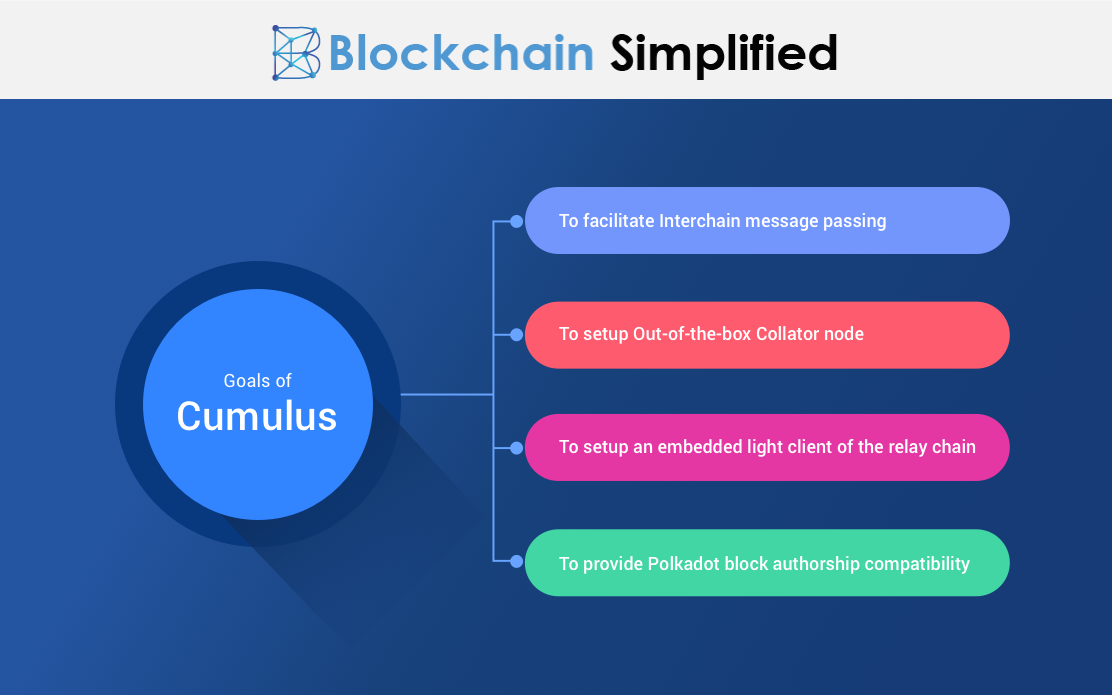 1) Cumulus Consensus - As we read above, Cumulus Consensus is a consensus engine tailor-made for Substrate for creating parachains. When consensus protocols are executed on the off chain Cumulus network, the load on the main layer is automatically reduced to improve scalability.

Go through this extremely detailed article on Cumulus consensus protocol that explains all the whats and hows of the Cumulus sidechain.