Why is Swift programming language the best for iOS App development?

The iOS app development & Android app development have gone through an evolution of sorts in all these years. While both have their own loyal audience and have been ruling the smartphone market like crazy, looking at the growing popularity of iPhones and iOS apps, businesses have been strategizing and launching their products on the iOS platform in order to make maximum profits.

While providing customers the highest quality products, choosing the right technology stacks, to build these apps & bring out exemplary performances from them, is of prime importance. The development of iOS apps started with Objective-C and for the longest time, this programming language was used to develop high quality, dynamic iOS apps. Objective-C was the preferred choice for iOS app developers due to its stable and mature features. Go through some of the characteristics of Objective-C here. 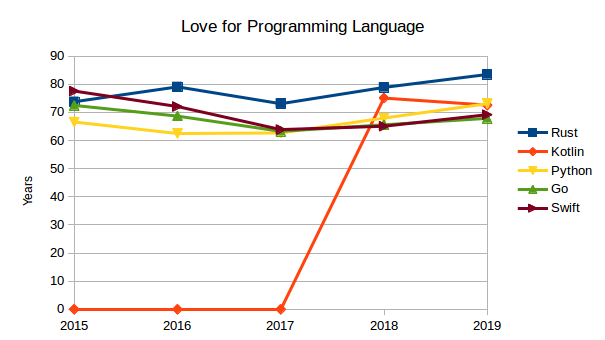 In this article, we will throw some light on the Swift programming language, its features and benefits and why is it the preferred language over Objective-C.

What is Swift programming language?

As described by Apple, Swift programming language is the “Objective without the C” i.e. it is not based on the C language at all, although it is compatible with the libraries and frameworks of C. It is often called an intuitive language, as it is very easy to learn and understand. The syntax is very simple and consolidated which is very important for any programming language. Swift programming language provides modern coding features like type inference, closures and generics etc. It also has several powerful tools to enhance app safety and system performance. Swift works with Cocoa and Cocoa Touch frameworks to develop beautiful UI/UX for the iOS apps. 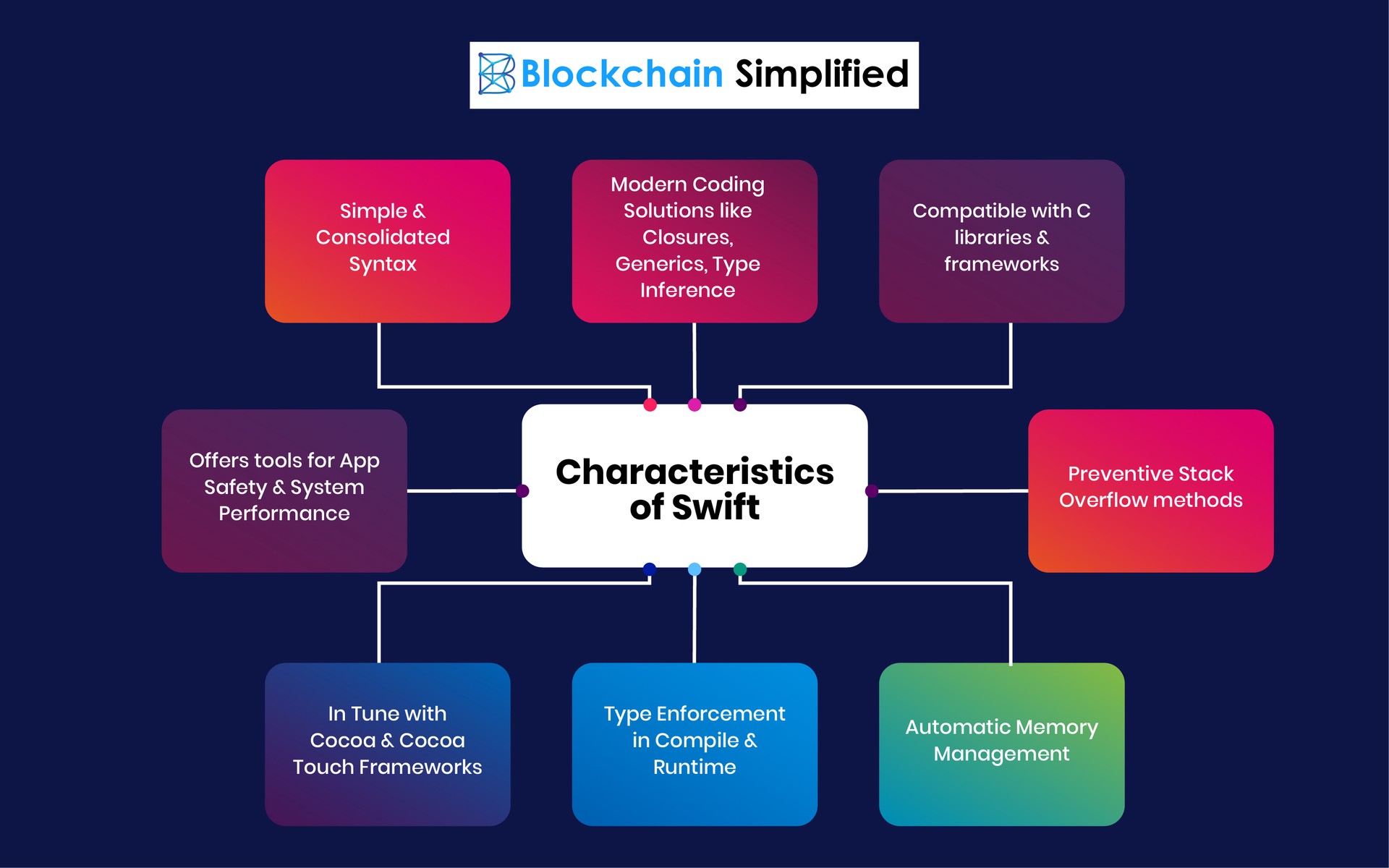 This is what a RedMonk analysis for top programming languages states -

““In a world in which it’s incredibly difficult to break into the Top 25 of language rankings, let alone the Top 10, Swift managed the chore in less than four years. It remains a growth phenomenon.“ 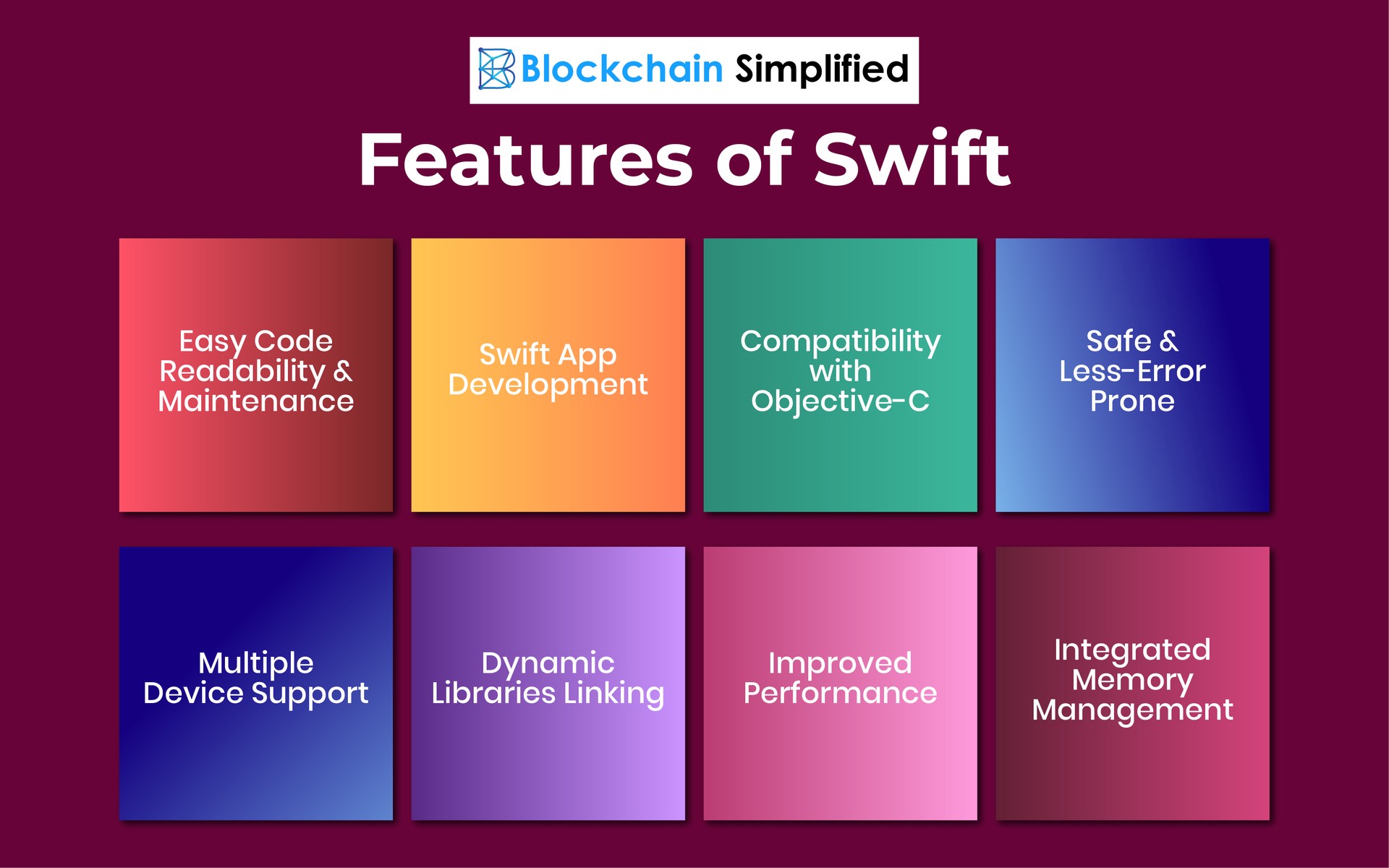 Perhaps this is one of the most important reasons why Swift programming language is preferred over Objective-C - it is extremely simple and easy to learn, understand and write the code even for beginners. To implement a particular piece of logic, you need to write very few lines of code in Swift as compared to its predecessor. It looks almost similar to basic English due to the elimination of conventional coding expressions like semicolons, parenthesis etc. Hence, the syntax looks more clean and readable.
For eg:- In Swift, it is not necessary to add commas at the end of the line code or at the end of the parenthesis. Also, calling methods inside brackets like in Objective-C is not needed, instead the parameters are separated using commas.

Due to less code, Swift programming language is compact in nature and can be reused to a great extent. Also, Swift has gotten rid of maintaining two sets of files - header and implementation - which was the case in C carried forward to Objective-C. Instead, it maintains everything in a .swift file thereby reducing developer’s headache of maintaining two separate sets of files for single code. However, this doesn’t hamper any performance of the app.

True to its name, Swift programming language is superfast compared to its contemporaries like Objective-C or Python. This article of Swift’s speed and performance is a testimony to that. Infact, Swift was developed with the objective of faster speed and app performance. Swift’s performance is comparable to that of C++ which is by far the fastest in arithmetic calculations. Therefore, it is the best language to build superfast iOS apps.

As mentioned above, even though Swift has nothing to do with C or Objective-C, it still is compatible with the libraries and frameworks of Objective-C. Language interoperability allows developers to import frameworks from Objective-C using the Swift syntax. This enables programmers to use Objective-C APIs and classes inside the Swift programming language code.

One of the biggest advantages of the Swift programming language is that it throws errors during the time of compilation itself which makes it easy for the iOS developer to fix it immediately, unlike Objective-C that doesn’t notify compilation errors but throws a big set of bugs during program execution at the later stage. Swift helps programmers write, compile and fix bugs all simultaneously while working on the code, thus implementing better quality control. Because errors are fixed and tested during the coding phase itself, apps are much faster and efficient and thus ensure safety and security.

In spite of the fact that Swift programming language was specially developed for Apple devices, it has not limited itself to only iOS platform. Swift, as a cross platform language, can also be used on Windows and Linux operating systems. There are also talks about making Swift, Android compatible, but there has been no development on this front, as yet.

It, now, is very easy to upgrade from one version of the Swift app to another with the support of Dynamic libraries. These libraries are codes that execute to store the new version codes in the memory.

As seen above, the performance of Swift programming language is at par with the likes of C++, which means it is one of the fastest performing languages beating Objective-C and the rest. Some studies show that it’s execution is 3 times faster than Objective-C whereas 8 times faster than Python. Its compatibility with cross platforms and dynamic library support help it to outperform its competitors in terms of execution speed.

The syncing with Cocoa frameworks enables Swift programming language to use the Cocoa APIs for taking care of memory management. It executes across the complete code to manage the memory of all objects by doing Automatic Reference Counting - ARC.

(https://blockchainsimplified.com is a top iOS app development company in Pune,India)

Why is Swift programming language the best for iOS app development?

While there are several frameworks like React Native or Flutter to build cross platform apps on iOS and Android, native iOS apps are still always better performing. Swift programming language also is graduating towards becoming a fully functional cross platform language with already making its mark with Windows and Linux. The day is not far when Swift will be on every app developer’s mind, irrespective of the operating system due to its unique and valuable features.