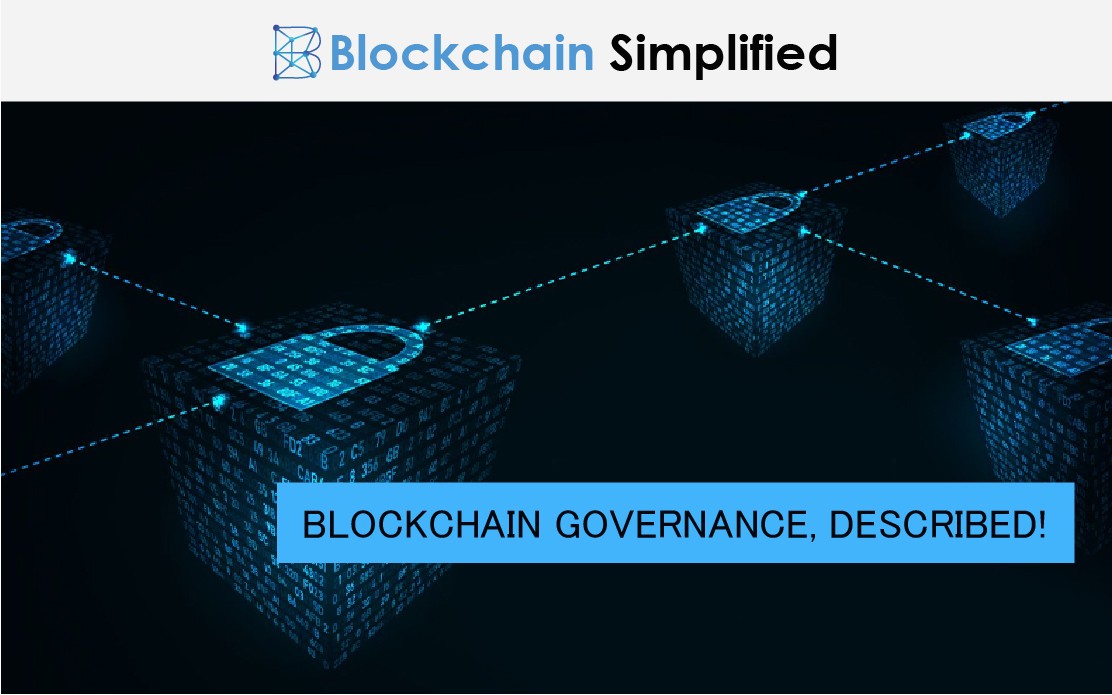 In the real world, in any kind of institution, organization or even in a community, there needs to be governance. Wherever there is a group of people or a group of resources operating together, it becomes extremely important that these resources are efficiently governed so that they sustain for a long time and work in harmony. That is the reason why we have governments to take care of communities, a family head to take care of the family, a principal to govern schools or colleges, etc.

While these are examples of real world governance, the digital world also needs proper and timely governance for seamless functioning of technology. So, even in the blockchain sphere, it becomes a matter of utmost importance that blockchain networks follow diligent and stringent governance rules to be able to provide a safe, secure and robust platform. Blockchain is a decentralized and distributed ledger technology and is operated and executed by users on the network. Even though decentralized, the growing number of Blockchain applications day by day while most of them being on public blockchains like Ethereum, the size of the applications, the complexities demand for a better Blockchain governance mechanism.

What is Blockchain Governance? 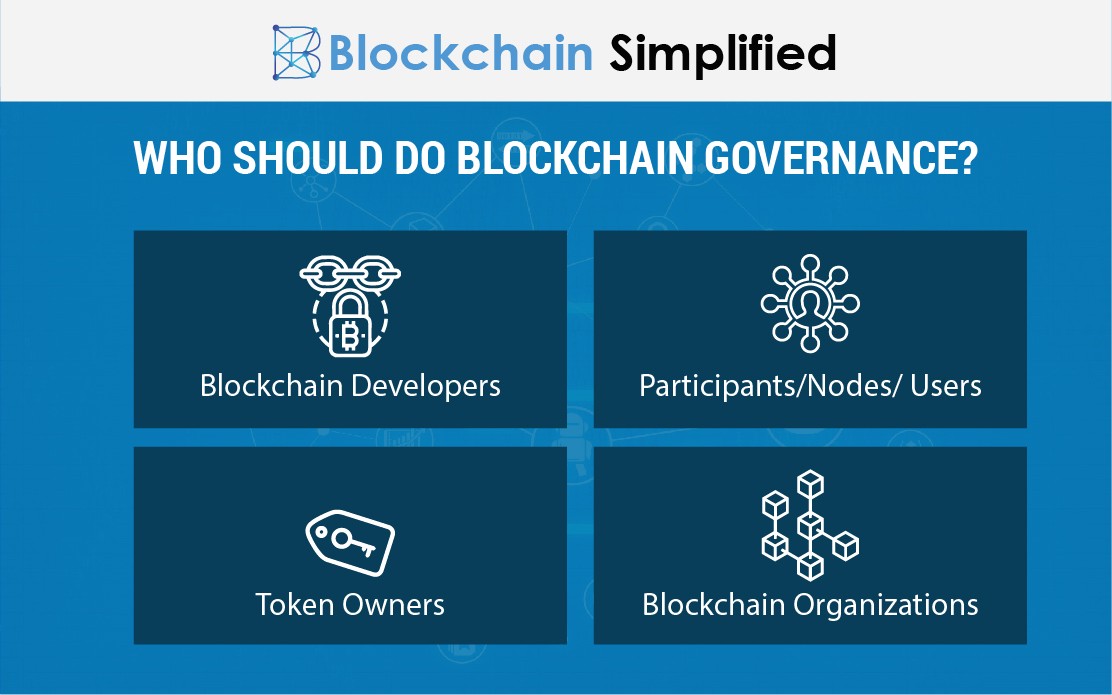 Typically there is always a central authority in any organization which is responsible for the governance of the system. But Blockchain being decentralized in nature does not have such a controlling power. Then how is Blockchain governance done? Who is responsible and how do they do it?

The responsibility of Blockchain governance is primarily divided into 4 entities; we’ll read about them one by one.

The Blockchain code developers, the developers of the actual Blockchain dApp are in-charge of supervising the code written for the platform. Ensuring the code is reliable, non-redundant, smart-contracts to reduce maximum manual intervention, to make the code more adaptable and re-usable, to make the code flexible enough to include necessary modifications and alterations if required etc are the major responsibilities of the blockchain developers. This is one of the main aspects of Blockchain governance to make the application inherently sturdy, robust and fool-proof.

Due to the increasing number of users, there are different requirements and multiple feature addition requests to the existing Blockchain platform. So in case of such a request, the users on the network can decide amongst themselves if they approve of the requirement or not. This way cluttering the application can be avoided and only important and extremely necessary features can be implemented. This simple mechanism is a very crucial facet of Blockchain governance.

More often, Blockchain platforms are developed, owned and managed by the same group of people. But there have been instances where a Blockchain organization is formed to manage a particular project and take care of the Blockchain governance. The main responsibilities of such forms include garnering funds for the development of the project, negotiations and discussions with developers and users, marketing and advertising of the project etc. Learn what Decentralized Autonomous Organizations (DAO) are. 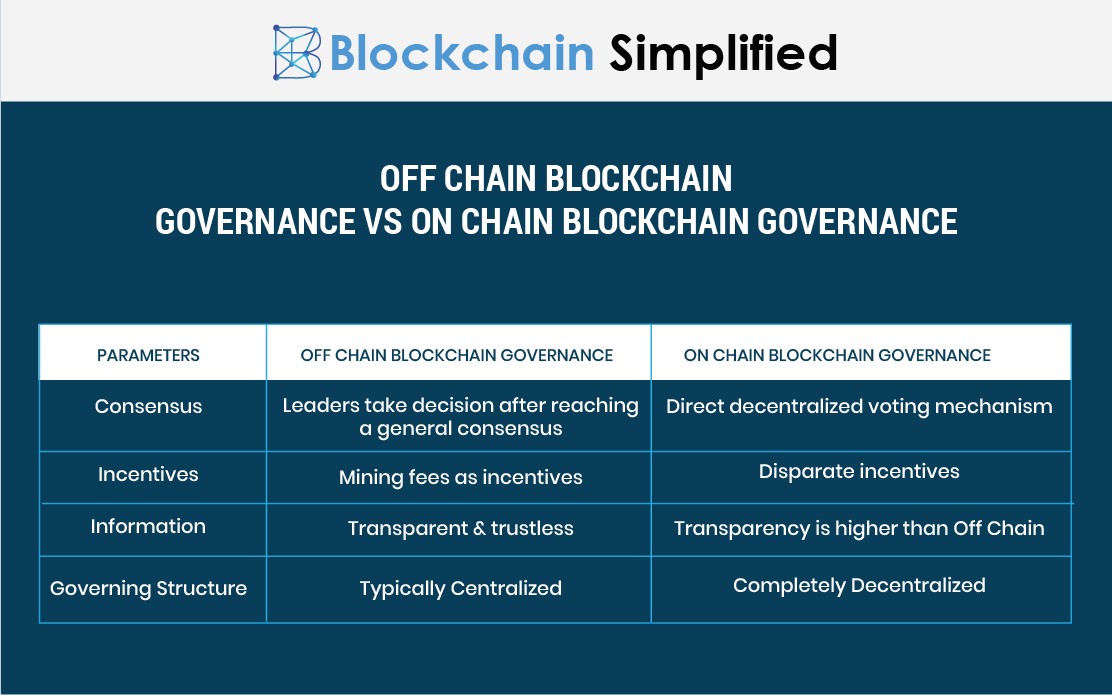 An Off Chain Blockchain Governance generally follows a centralized leadership model. Leaders decide amongst themselves and reach a consensus for any point. Users/participants have absolutely no say in the decision process hence such a model does not adhere to Blockchain’s promotion of decentralization. But although it is slightly centralized, the off chain model strikes a balance between the leaders, the developers and the business to reach a conclusion. Due to this, the incentive mechanism suffers in this type of blockchain governance as miners, developers and businesses look for different kinds of incentives from the process.

Looking at the various scenarios that Blockchain encounters, it would be safe to say that a mix of On Chain and Off Chain Blockchain governance is the best to comply with all requirements. However, different use-cases demand different strategies so which blockchain governance strategy to be applied is completely dependent on the nature of the project and its requisites.