The Blockchain approach for a better Water Management System 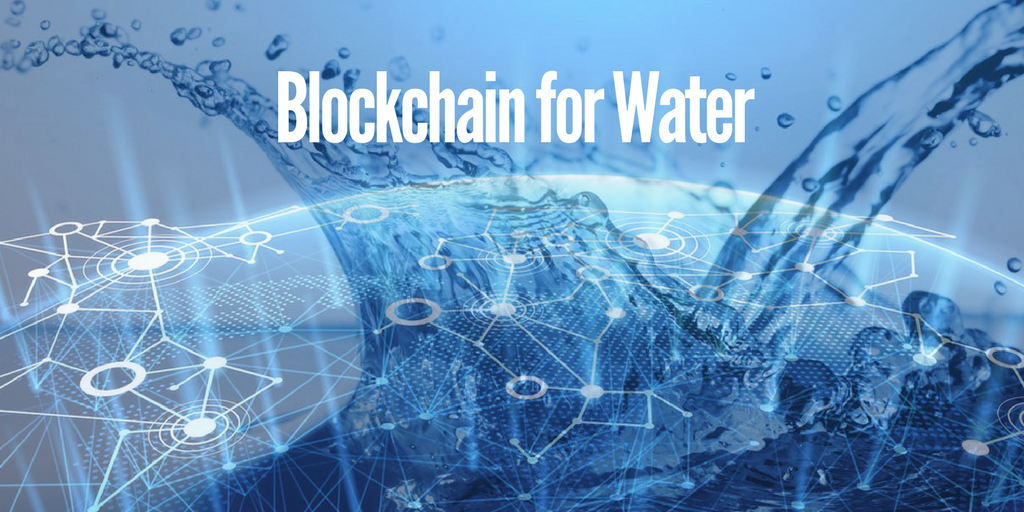 Below are some startling statistics that would help you gauge the intensity of water crisis that is affecting the world.

-Two-thirds of the earth is covered in water, but only 1 percent of it is usable for humans.

-There are 326 million trillion gallons of water on earth. 97% is salt water and undrinkable. 2.5% is fresh water, but most of this is trapped in the poles or deep underground. This leaves us with roughly 0.4% to share amongst 7 billion people.

-Approximately 4.5 billion people across the world have no access to safe water supplies due to water scarcity.

-1 in every three people globally lacks access to safe drinking water according to the World Health Organization.

See below how water scarcity is set to reach desperate levels by the year 2040. 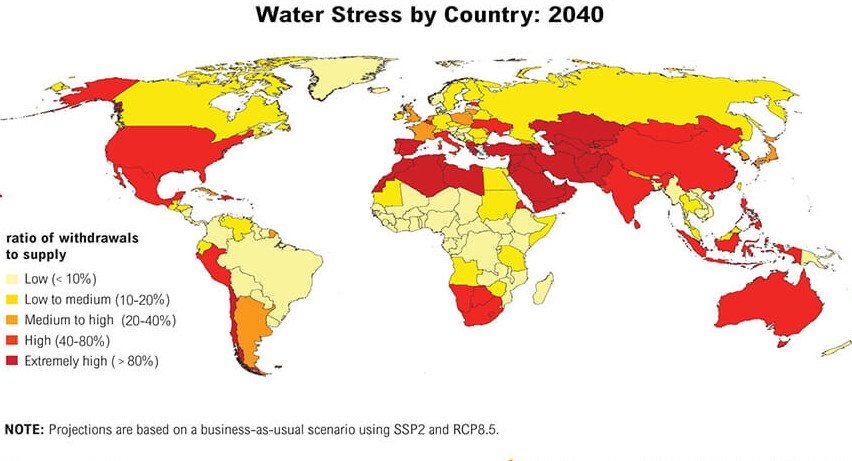 Under the pretext of civilisation and industrial revolution, humans are solely responsible for the rapidly rising global warming which in turn has resulted in severe water crisis globally. Cape Town in South Africa reached its day zero and faced the worst nightmare of water shortage a couple of years back. Water scarcity can also cause grave consequences in the Agriculture, Energy and several interlinked sectors, impacting not only the socio-economic conditions but also hampering basic survival of mankind and the likes. Increased deforestation for urbanization, rapid growth in population, rising industrialism and commercialization are the major culprits who have contributed to the escalated and dangerous levels of climate change and water shortage epidemic. While this is an issue that should have been addressed a long time ago, nevertheless, it demands immediate attention where a solution for a better Water management system needs to be devised. And who better than Blockchain can serve the purpose of ending water woes worldwide? Blockchain in Agriculture, Blockchain in Energy - Blockchain has the magical power to eradicate complex challenges in almost every field. Let us see how a Blockchain based Water management system can provide necessary solutions to effectively manage water resources and improve water quality.

Water Management Conflicts and the need for Blockchain 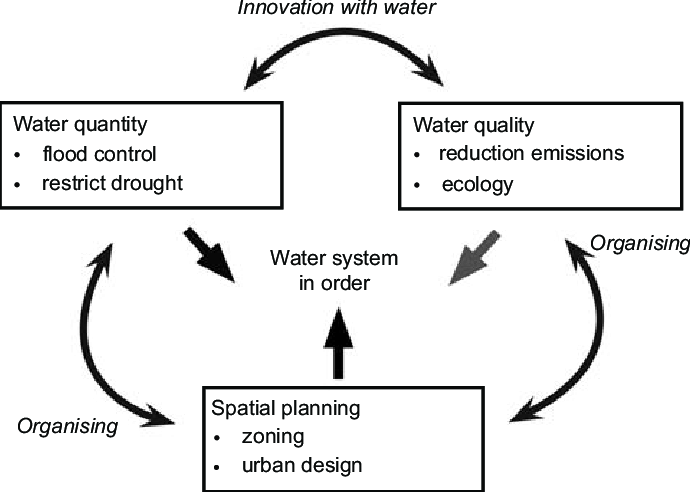 Amongst the many challenges that occur in the field of Water preservation and management, the natural shortage of water ofcourse tops the list, for which least can be done about. But we can surely think about effectively managing whatever available water resources we have.

The Agriculture sector fundamentally is extremely dependent on water. While proper irrigation methods form the crux of farming and cultivation, heavy irrigation processes not only harm and misuse the agricultural land, they also tend to make it more drought-prone. Overuse of water resources without proper management is one of the many causes of water scarcity in several regions. Droughts result in lesser agricultural produce with the basic human necessity of food being compromised and therefore causing severely diminishing standard of living. Such regions remain severely malnourished since they aren’t able to sustain their people with food and water, the basic necessities. Hence, there is a justified need for an efficient water management system to handle water resources.

Although water is a basic commodity and an everyday need, it is still treated as a tradable commodity for earning profits and benefits by certain section of people in the society. Water generation and allocation is still governed by centralized organizations like the municipal corporations and the governments. These corporations are responsible for water supply to their respective jurisdiction, they decide the costs consumers have to incur for using the resources, the quantity of water that is distributed etc etc. Consumers are forced to consume water supplied by these agencies and pay unreasonable prices for the same since they themselves are not able to meet the demands.

Moreover, water quality has been a pressing concern over the years that remains unsolved. While the majority of water available on Earth is salt water and not suitable for consumption, there are very few desalination mechanisms developed to address this issue. Also, several water micropollutants like lead,natural organic matter, waste and residue from industries are responsible for the contamination of water resources. These resources lack proper water treatment programmes and hence polluted and contaminated water is supplied and distributed throughout. The lead contaminated water crisis in Flint, Michigan, US is a horrifying example of how water quality causes hazardous effects on health.

Blockchain has the potential to attack most of these challenges and provide an efficient water management platform to eliminate centralized water markets, abolish unfair practices of extracting excessive water fees from consumers and more. Let us see how. 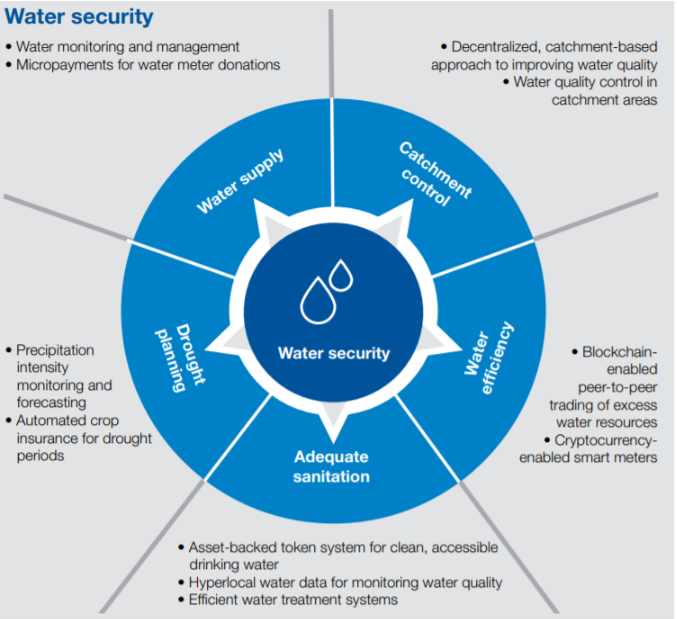 Blockchain technology can be used to develop a decentralized and transparent system to ensure equal distribution of water over widespread geographic areas. Infact, any centralized organization or intermediary distributor agency that is solely responsible for supplying water can be completely eliminated from the process. Rather, a Blockchain based platform which comprises of consumers, corporations, governments all as participants, for peer-to-peer communication and easy interaction between parties to discuss regarding water conservation, preservation and distribution can be devised. A fairer, transparent system on Blockchain to decide about water fees without the involvement of illegal and third parties can be developed. This Blockchain platform can be used to log transactions of quantity of water distributed, consumed, fees paid, surplus water shared etc. Since the Blockchain is immutable, no party will be able to tamper with the data or misuse it.

Blockchain can be used to create a water trading system between consumer to consumer wherein a consumer having a license to collect water from natural water resources shares the excess water with other consumers at a controlled price. A blockchain based system to track all the events in this process can be built to ensure faster direct trading, without the need for third parties.

To tackle the issue of water pollution and for improving water quality, a Blockchain-IoT system can be developed. The implementation of automatic smart sensors to detect water pollutants in water resources that notifies water managers of the present contamination is a great idea. These sensors measure the level of pollution while simultaneously informing concerned authorities to take corrective measures for the same. These sensors also identify water leaks from pipe bursts that can reduce significant water wastage.

Above image represents more Blockchain use cases for Water Management.

While Blockchain can transform the water management system via its decentralized, immutable and transparent characteristics, it is also our responsibility to wisely use a scarce but very important resource like water, if we do not wish to see Day Zeros in our life.