PWA vs Native Apps - Battle of the Bests 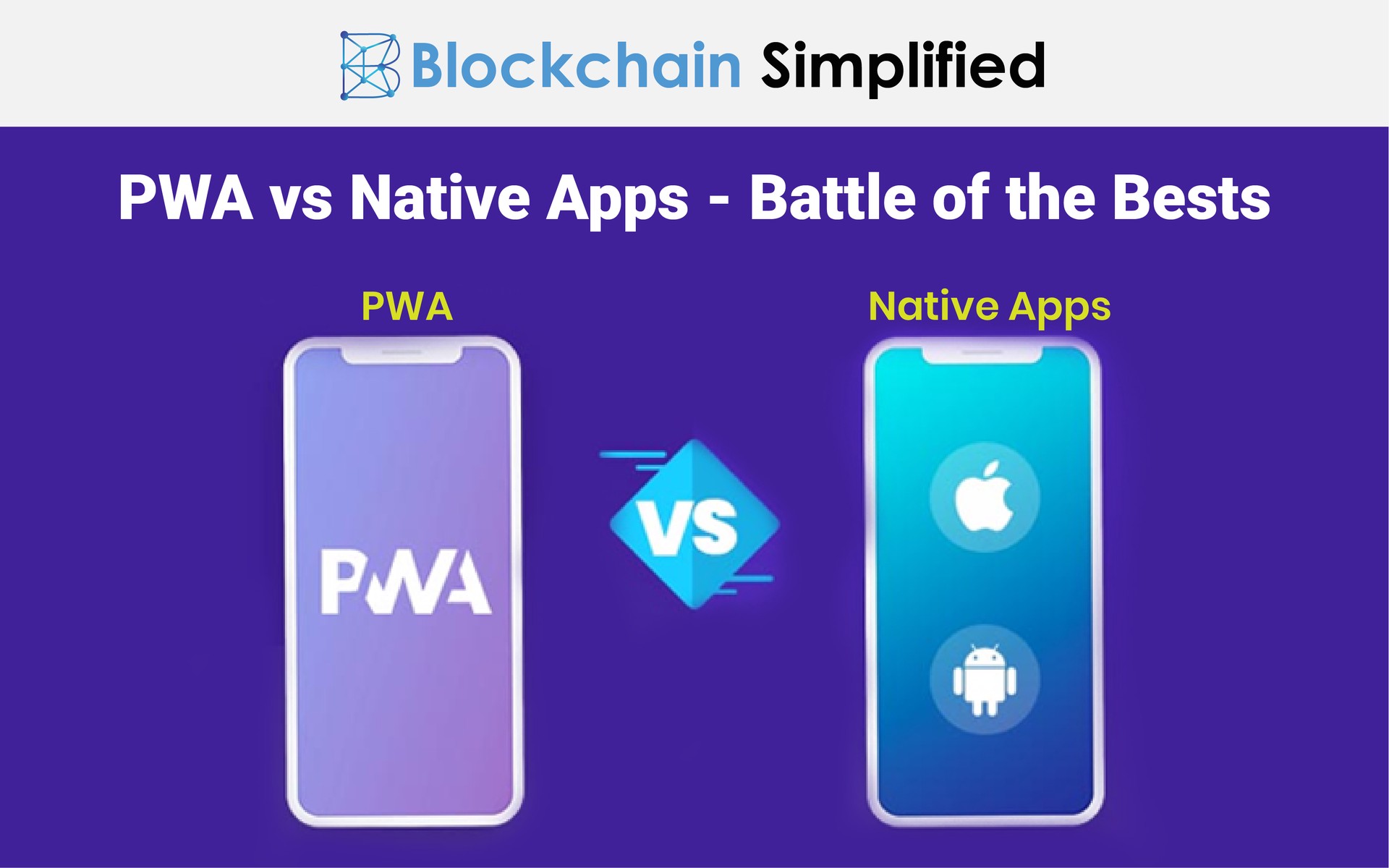 Over the years, mobile apps have had exponential growth in the digital world, thanks to their easy handling, quick access, faster results and many other distinctive features. More and more companies have migrated from traditional websites to respective mobile native apps to deliver the best user experience.

With advanced frameworks like React Native, Flutter, Xamarin etc for their perusal for easy and faster accessibility, cross platform apps are easy to develop as well. 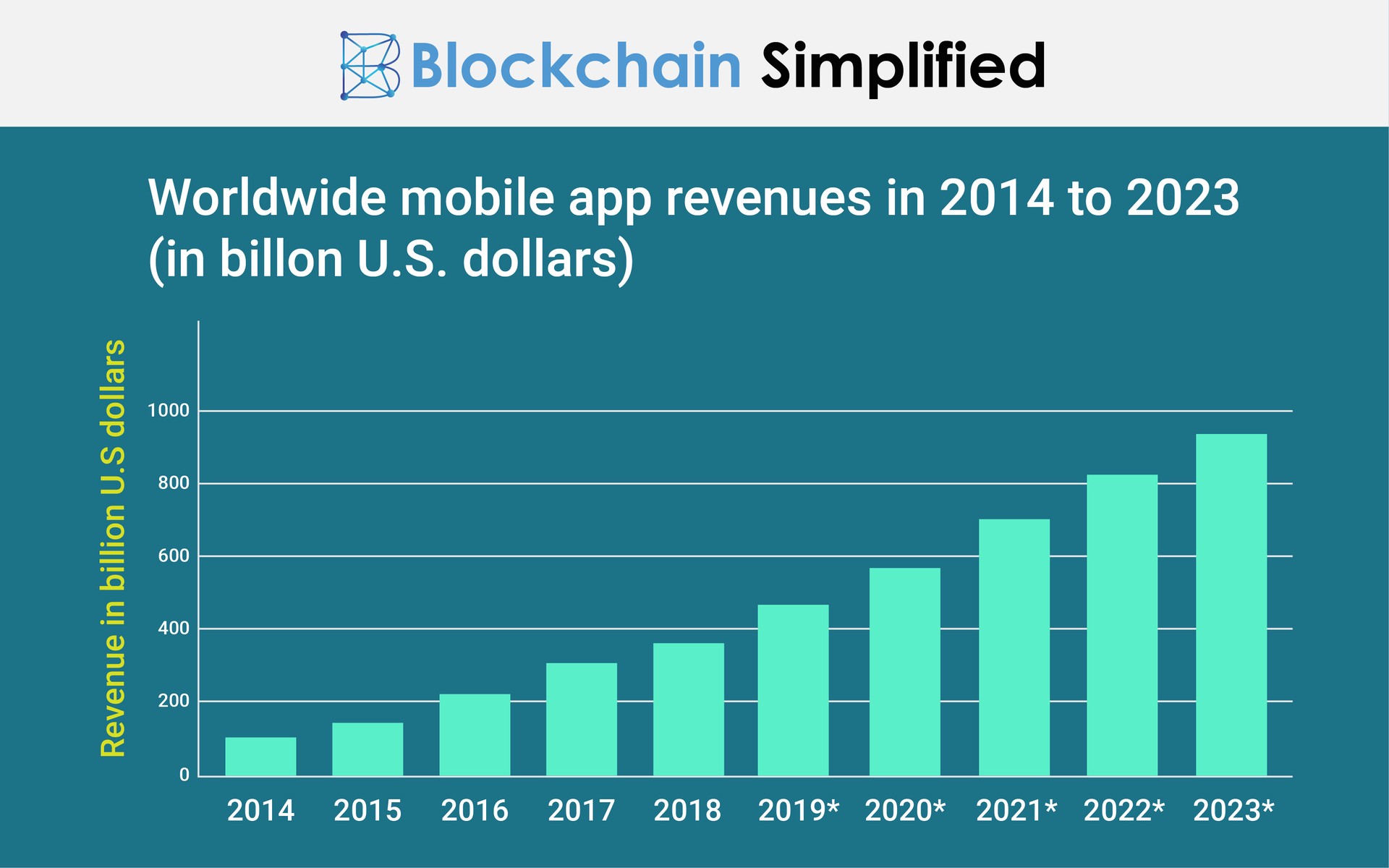 And then emerged the PWA (progressive web app) . PWAs are a hybrid of a web app and a mobile application, which offers features of native apps on a website. PWAs have gained massive popularity in a short span of time as they are user-centric, easy to develop and have lesser developmental costs.

In this battle of PWA vs Native, which one will you pick? Ofcourse, there are differences between native and PWA, let us analyze both and understand why they are the best?

Below listed are the main differences between Native apps and PWA, based on a few key characteristics.

PWA : PWA’s are not platform specific (that means they can be accessed on any OS), rather they are browser based. Like traditional websites, they are accessed using a specific URL, after which users can navigate and browse through the site.

PWA’s on Android allow users to install the PWA (similar to a native app), while iOS still uses the Add to Home Screen functionality. There is no indication of a PWA website as one, to distinguish it from other apps.

Native Apps : Native apps have to be installed/downloaded via Google PlayStore (Android) or Apple’s App Store(iOS). Once installed, they stay on your mobile screen and can be accessed quite easily and navigated through.

Native vs PWA : Native apps are easy to access unlike PWAs who need frequent typing of URLs. But the reach and visibility of PWAs is far better than native apps as they are indexed by Google and can be optimized using SEO techniques. Native apps, on the other hand, have to be searched for specifically on app stores, unless they are a popular brand having specific keywords.

PWA : PWAs are designed and developed in a manner that they can be utilized and executed on any operating system, meaning they are platform independent. PWAs use a solitary piece of code, written in JavaScript, HTML and CSS, that is reused across all platforms, be it Android, iOS or even on the desktop, by just making minute changes in the codebase.

Infact, PWAs are browser dependent, which means that they may not look similar on different browsers, and it becomes the browser’s responsibility to display the website accordingly, while being compatible with its screen variables.

Native Apps : Owing to their name, native apps are dedicated apps, developed to execute only on their respective operating systems, keeping in mind the platform’s technical capabilities. While iOS apps are written in Swift and Objective-C, Java is the programming language used for Android apps.

Native vs PWA : PWAs hold a higher ground over native apps, when it comes to designing apps having cross platform functionalities.

https://blockchainsimplified.com/ is a top mobile app and PWA development company in Pune, India.

PWA : PWAs have the service workers who, with their intelligent caching capabilities , allow the memory to store visited pages. Hence, even in a no network zone, if a user tries to revisit the same page, it is fetched from the cache and rendered to the user. There are, however, certain functionalities, for instance, submitting a user form, that are dependent on Internet connectivity, and hence cannot be served to the user, when offline.

Native Apps : Native apps also provide the user, the facility to access any information from the app, without being connected to the Internet. This is one of the biggest advantages of the native apps.

Native vs PWA : Native apps are the winners in this category, as they allow the user to be connected without actually being connected (to the Internet).

PWA : PWAs are known for their instant page loading capabilities, thanks to the service workers. Since they perform the task of caching visited pages, every subsequent page load happens almost instantaneously. This results in lesser bounce rate, and higher user retention.

Native Apps : Native apps take lesser processing and computational time, since they are tied to their respective OS, under the hood.

Native vs PWA : Native apps are slower in page loading, when compared to PWAs but when it comes to data processing, they score high and are more powerful.

PWA : One of the best attributes of the PWA is that new features/updates are refreshed in the background and are integrated with the website, with a simple page refresh. Any modification/update does not require any kind of approval and can be implemented right away.

Native Apps : Users have to frequently update/reinstall the app to include updated/new features in the app, via the app store. Native apps have to go through the process of submission on the app store and also meet certain requirements in order to get published.

Native vs PWA : PWAs, surely, are ahead of native apps with regards to distribution and data updation.

PWA : Since they are platform independent, PWAs do not require platform specific app development technical expertise. PWAs are coded in JavaScript, HTML and CSS, which are highly popular and widely used. Codes written once can be reused across various OS.

Native Apps : Native apps necessitate the need of having OS specific technical skills like Java (Android) or Objective-C and Swift (iOS) and so on. For the app to be cross platform, it needs to be developed for both platforms separately.

Native vs PWA : Developing a native app is more expensive than a PWA since it involves the inclusion of technical developers from multiple backgrounds, whereas PWA only requires someone well-versed with JavaScript.

PWA : PWAs are always served through a secure protocol, i.e. the https, which make sure that data is tamper-proof and not manipulated with.

Native Apps : With a lot of security measures like the certificate pinning, multi factor authentication etc, native apps are very secure. Also, they automatically add another layer of security since they are authorized by trustworthy sites like Google or Apple, while getting published in their app stores. 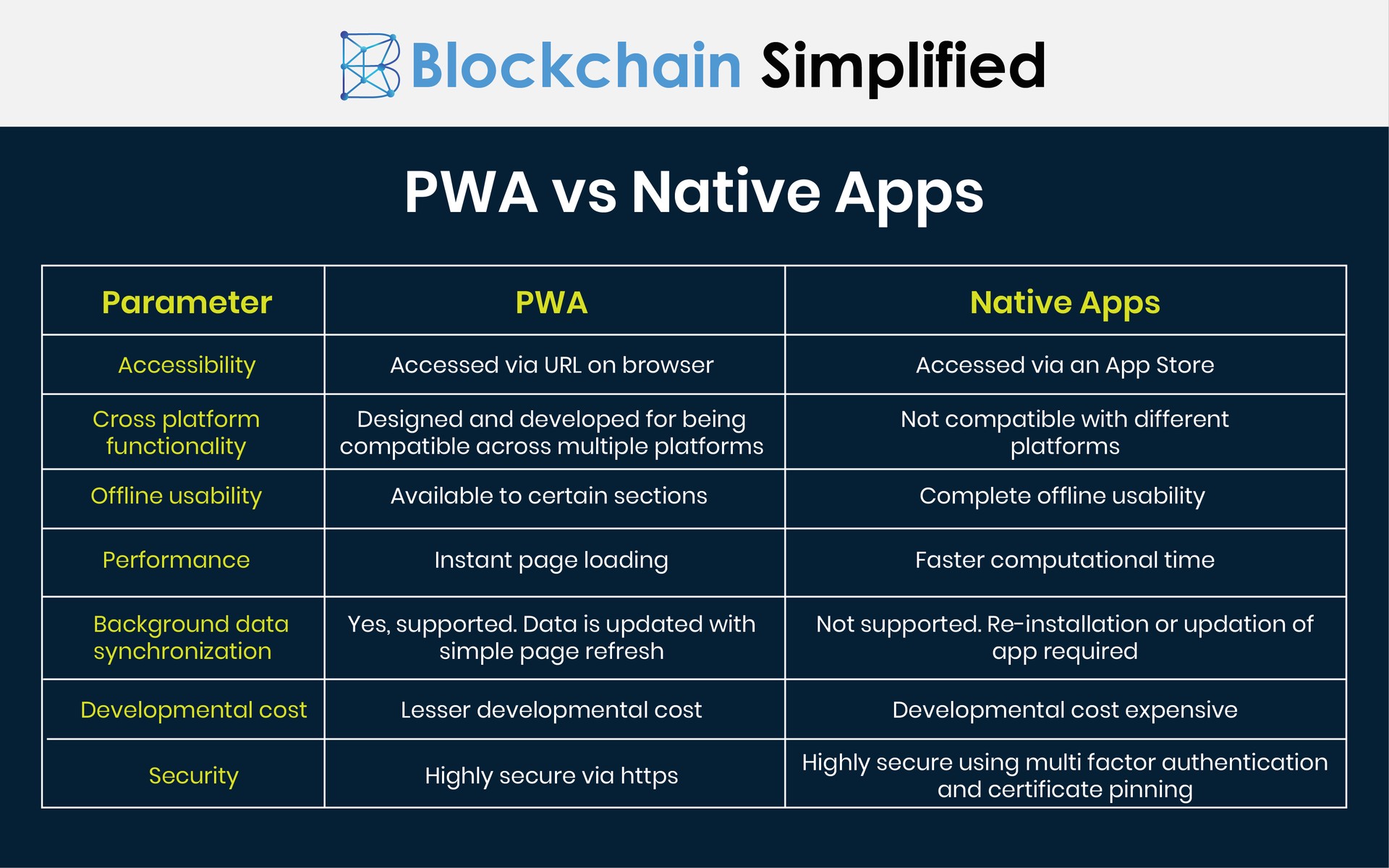 In this debate of PWA vs Native Apps, neither of them wins or loses. Both have their own strengths and weaknesses. The above pointers can help you gauge differences between the two, and simultaneously also help you in identifying the potential use cases for each of them.